A young Jackson girl moved to Tennessee from upstate New York and just last week starred in a tattoo competition show called “Ink Masters: Angels.”
Now, she runs her own shop in the Hub City. 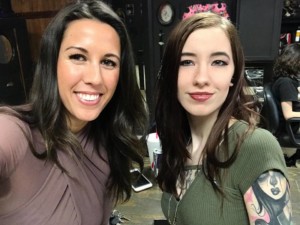 “I lost count of how many tattoos I have,” laughs Bri Walker, owner of Other Mother Tattoo in Jackson.

The 26-year-old has been a tattoo artist since she was 18-years-old. She and her friend, Whitney Harbin, recently opened Other Mother Tattoo on Carriage House Drive.

“It’s the first all girl tattoo place in Jackson, Tennessee. We wanted to open Other Mother to have a comfortable environment for people, especially girls, to come get tattooed,” said Walker.

“This is the smoothest tattoo I’ve ever gotten. She has the most impressive gun I have ever seen and I know,” said customer, Bailey Lavin.

“We’re really personable. We can give them advice,” said Harbin.

The girls also enjoy painting and drawing on canvas. They made all the artwork inside the shop.

“The end goal is to happily tattoo until I can’t do it anymore,” said Harbin.

Both girls say they negotiate all prices with their clients.

Other Mother Tattoo is located at 566G Carriage House Drive in Jackson.