3 children, 1 man airlifted after rollover crash on I-40 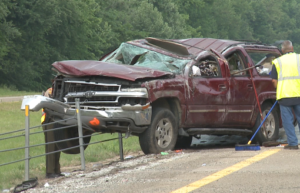 The Tennessee Highway Patrol says they got the call just after 6:30 Wednesday morning to the crash on westbound I-40 around mile marker 68.

We are told a family of five were inside the SUV, including three children. Officials say they do not believe the kids were wearing seat belts at the time of the accident.

“It’s just a bad scene for us. Anytime it’s involving children, it makes it tougher,” Turner said. “Then we had to bring in aircraft to get them to Memphis.”

Officials say the father was driving the SUV. He was partially ejected from the vehicle.

Four helicopters landed on the interstate, taking the four injured to a Memphis hospital.

Traffic was backed up for miles as investigators marked and cleaned up the scene.

The Madison County Fire Department helped with the crash and brought in their special operations truck.

“For rescue purposes, we thought we had people trapped, but luckily that wasn’t the case,” Turner said.

Two tow trucks were brought in to get the SUV off the median cables.

There is not yet word on what caused the crash.

Educator of the Week: Lauren Schraw