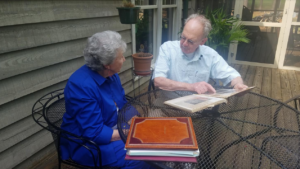 “On patrol one night, I got hit with a motor round.  It bogeyed up my face pretty good and I had a plastic surgery,” said Swaim.

It was from that point on Swaim says he knew his mission was to help people.

“I love people and I like doing things that are beneficial to ’em,” said Swaim.

Most of all he loves his wife of 65 years, Elizabeth Swaim.

“He’s full of it! He has a lot of personality, he really does. Like he said, he loves people. He feels good when he can do something to help someone,” says Elizabeth Swaim.

His love for people is what led him to be heavily involved in the West Tennessee community. He worked as a Madison County Agent for almost 9 years. He was also involved in the Chamber of Commerce, a former President of Rotary Club and a past President of Youthtown. He says some of his most memorable work is with 4-H, a program that helps mentor children to make positive influences in the community.

“Hopefully, the influence I was able to have on those kids, I think, is most important,” said Swaim.

In 1973, he was the director of the Obion Forked Deer Basin Authority for 23 years where he and his staff built more than one hundred lakes in West Tennessee.

“That helped an awful lot of people and we didn’t spend any tax money either,” said Swaim.

His work hasnt gotten unnoticed, however, Swaim says he doesn’t do it for the recognition.

“I’m humbled and sort of overwhelmed. Here I am, closer to 90 than 85 and to be recognized like this is really kind of awesome,” said Swaim.