JACKSON, Tenn. — Twice a week, you can find Willie White volunteering at Regency Retirement Home in Jackson doing what she loves. 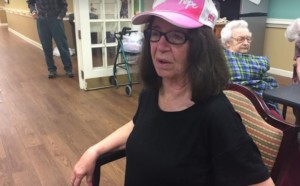 “I feel the Lord spoke to my heart, and he said ‘this is what I’ve called you to do,'” White said.

She’s helped elderly patients exercise for the past five years at Regency. It was in 1982 when she helped create “Volunteers of Love,” where White visits nursing homes and simply spreads the love. On Christmas, she is known for bringing teddy bears.

“Being there for them because a lot of them don’t have anybody. A lot of them have absolutely no family at all,” White’s husband, Johnny White, said. “Sometimes they just want to be touched, be loved, and that’s who she is. She’s a four-time cancer survivor. She loves coming back to the nursing home and helping out.”

And that’s why White is June’s Jefferson Award honoree, a nationwide award that honors local people for making a positive impact on the community.

White says being friendly keeps her and her friends young at heart.

“I don’t want any recognition or anything. The only thing I regret is that I can’t do it all over again because I wouldn’t change a thing,” White said.