WASHINGTON, D.C.–Thursday night, a local hero is honored in Washington D.C. at an annual gala as a part of the Jefferson Awards in partnership with Leader’s Credit Union. 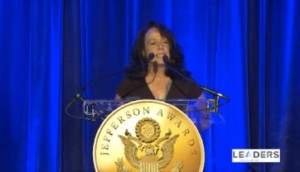 The Jefferson Award is a nationwide award that honors community members who make a positive impact in their community and beyond.

“In 2009, I found myself next to my father in a hospital bed. He was the most wonderful man there ever was,” said Lori Collins, Jefferson Award winner.

When Collins’ father passed away, she knew she wanted to make a difference in the community. She says her father’s love of horses is the reason she created Redemption Road Rescue in Jackson. It’s a non-profit and safe haven for mistreated and neglected horses and farm animals.

“It was at that point I realized that good people get in bad situations. I wanted to provide for those people in those situations without judgement, but with care and love,” said Collins.

Thursday night, unsung heroes celebrated what they call America’s most prestigious celebration of public service. Collins says she listened to other award winners from across the country share their stories. Collins even met with Senators Bob Corker and Lamar Alexander to discuss law reform concerning animal cruelty and neglect.

You can nominate an unsung hero or someone who you feel has made a positive impact on the community at LeadersCU.com.