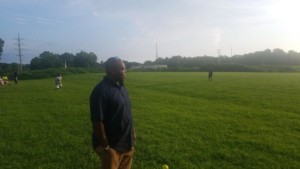 “I hope they learn nothing beats a failure like a try,” says Brooks.

For the past 15 years, he’s coached county league football, traveling league football, baseball and basketball. But, its what he teaches off the field that counts. He mentors teens like Makel Moris and his nephew Kaevon Stamper.

“He teaches young kids to stay off the streets and stuff like that,” says Morris.

“I was small when I was younger. He always taught me being small doesn’t mean anything, even though you’re small, you pack a lot of power. He made a real good impact on my life,” said Stamper.

His postive impact on others is the reason why he is July’s Jefferson Award honoree, a nationwide award that honors local unsung heroes.

“They need somebody to talk to. I just do it from my heart,” said Brooks.