UPDATE: In a statement from Tyson Foods provided Friday to WBBJ 7 Eyewitness News, the company says they currently have no plans for chicken farms in Haywood County. See the full statement below.

HAYWOOD COUNTY, Tenn. — Many West Tennesseans welcome Tyson’s new plants, which are set to be in both Humboldt and Union City, but with plants come chicken houses, and many Haywood County residents tell the chicken production giant, “Don’t tread on Tennessee.” 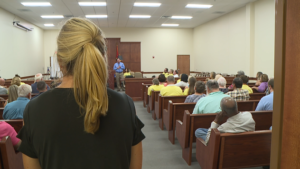 “I was initially inspired to put this meeting together because I have a conscience about what CAFEDS, which are concentrated animal feeding operations, do to the earth,” said meeting organizer Belinda Sellari.

People living in Haywood County say they are concerned about Tyson Foods expanding their chicken production operation in West Tennessee.

“I don’t think when they came to Haywood County they realized that we were going to put up this kind of fight,” Haywood County resident Natalie Pinner said. 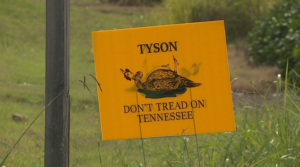 Pinner says her son is the sixth generation to live on her family farm and says she’s worried the addition will ruin their rural quality of life.

“We were going from a quiet, secluded area to now just all of this commotion every day on this small road,” Pinner said.

“The problems that we might see from this is the accumulation of too much phosphorus and nitrates that will lead to algae blooms, causing problems for aquatic species,” said Scott Banbury, conservation program coordinator for the Tennessee Chapter of the Sierra Club.

Because of this, they say they want to be able to make their own regulations. 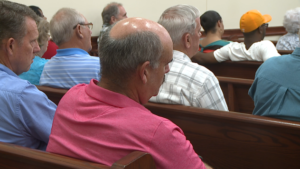 “We do everything as a community, and this would just put a damper on all of that, and I just want them to realize we’re not standing for it,” Pinner said.

So far, meeting organizers tell us one farmer contracted under Tyson had purchased two pieces of property in their county, but as of now, both have been put back on the market.

“We’re grateful for the tremendous support we’ve received in Tennessee for new poultry operations in the state, but are surprised by concerns raised in Haywood County, since we currently have no plans for chicken farms there.

“We’ve been doing business in Tennessee for more than 45 years and we expect independent farmers who raise chickens for us to be good neighbors and follow all environmental regulations. That includes meeting guidelines for the location of chicken houses, which involve required set back distances from homes, schools and churches.”