Local principal a finalist for ‘Principal of the Year’ award

ALAMO, Tenn. — Every year, the state selects nominees for the ‘Principal of the Year’ award. 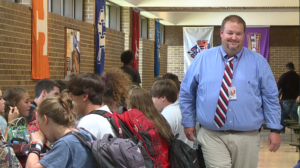 Out of nine finalists for the award, Foust is happy to be one of them.

“I do think that it’s a huge honor, as many principals in West Tennessee and Tennessee, to be one of the three finalists for west Tennessee.”

Foust has 18 years of teaching and leadership experience at the high school.

“Here in Crockett County, I graduated from here in 1995,” said Foust. “Went to Martin, came back here. I have been assistant principal for three, and this is my fifth full year being the principal here at the high school.”

He says there will always be challenges he faces, but has made sure to focus on putting his students first.

“When I took over five years ago, we made some changes and did some things,” said Foust. “I think the biggest success right now is our kids. After high school they’re moving on to post-secondary education.”

Foust says he couldn’t do it himself though, adding that his biggest accomplishment is seeing that his faculty works together as family.

“Foust is also a person who would rather be behind the scenes,” said Crockett County High School librarian Mindy Nichols, who has known Foust since he first started at the school. “He wouldn’t want any recognition and a lot of times people like that don’t get recognized, and so I’m glad that all of his hard work has paid off.”

And even if he isn’t chosen as ‘Principal of the Year,’ he’s still happy to have made an impact throughout his career.

“If I’m chosen, great,” said Foust. “If not, I’m honored to be where I am right now, being chosen in West Tennessee over everyone else’s principals who’s just as deserving as I am.”

The Tennessee ‘Principal of the Year’ finalists will be announced Oct. 4, during the Tennessee Education Department’s L.E.A.D conference in Nashville.