JACKSON, Tenn. — A panel of gubernatorial and legislative nominees had the chance to speak Wednesday at the West Tennessee Mayors Association Meeting in Jackson. 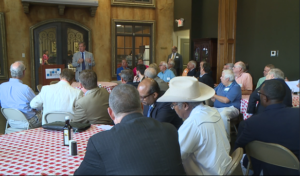 Some members of the panel spoke on issues involving their region or issues affecting the entire state. Democratic gubernatorial nominee Karl Dean attended the meeting to hear the mayors’ concerns.

“Anytime you have an opportunity to meet with a group of mayors and hear about their concerns and challenges that their community faces, that’s a good thing to do,” Dean said.

Some of these concerns and challenges involve affordable health care.

“When people have to make choices between paying their rent or purchasing their medication, and no one should have to go through that,” said District 82 Democratic nominee Andrea Bond-Johnson.

Those tough choices are what many of the panel members want to tackle. Wednesday’s meeting allowed the candidates to hear concerns and offer different solutions.

“I got a chance today to listen to the city mayors, and so the thing that I found most interesting is our role as a state legislature and what we need to do to support the local government,” Johnson said.

It was a chance for attendees to communicate their thoughts regardless of their political affiliation.

“Whether you’re mayor or whether you’re running for governor, that people get together and talk and try to work together,” Dean said. “It’s not about my agenda or someone else’s agenda. It’s about what we can do together to move Tennessee forward.”