JACKSON, Tenn. — Before Saturday’s Generals game, a member of the U.S. Navy received a prestige promotion. 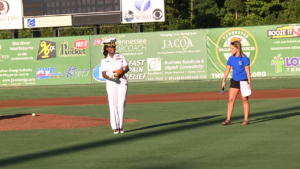 It is not an advancement that can be easily attained.  It is the first promotion attained to become a senior officer in the military. In order to receive it, the President of the United States must grant it, then Congress must approve it.

Williams was selected to throw the game’s first pitch.

“I absolutely love Jackson General baseball,” she said, “throwing the first pitch was the best thing ever… besides my promotion.”

Commander Sheree Williams has served in the U.S. Navy for 22 years and looks forward to what comes next.