JACKSON, Tenn. — Friends and family gathered at Union University to honor their loved ones who are gone but not forgotten. 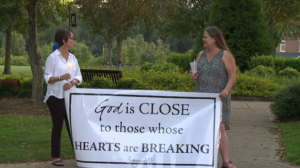 Dozens of faces line a memory quilt in the banquet hall at Union University.

Faces from all different backgrounds, with one thing in common: their lives cut short due to homicide or a violent crime.

“He was full of life, he was fun, he was crazy and he was fun to be with,” said Betty Morris, who lost her son due to a violent crime.

Morris comes to the “Remember Me” Commemorative Walk at Union every year.

“But life goes on, and he still left me a son and a daughter,” Morris said.

Associate Dean for Union’s school of social work Nita Mehr says along with the dinner and remembrance walk, a balloon release was held and gifts were presented to family members left to cope with the consequences of crime.

“So they take the dying memories and put them into something more positive,” Mehr said. “They show their resilience and they reach out to others who need help.”

For survivors like Morris, it’s a way to connect with those who too are still grieving.

“And that’s what it’s all about,” she said. “It’s being connected to people that you know have shared the same thing that you’ve been through.”

The walk was presented by Union University’s School of Social Work.

Organizers say families traveled from as far as Alabama this year to be a part of it.

This was the 11th year for the “Remember Me” walk.