JACKSON, Tenn. — October marks the beginning of deer season, which means the odds of hitting one while driving goes up. 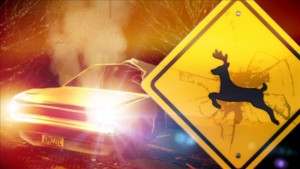 According to an annual study by State Farm, deer-related wrecks in the state have actually gone down.

“Deer collisions have decreased by 17 percent over last year in Tennessee,” Harris said. “And so the reason that I think that is is because people are becoming more aware. But I think it really is about education and that people know somebody that has hit a deer.”

It might be a little hard to spot them throughout the day, especially in the middle of the day. The best chance to actually catch some deer is around dusk and dawn, but unfortunately that’s around the time most accidents occur due to deer collisions.

Many of these deer collisions happen out of the blue, but there are several safety tips to take into consideration if you want to prevent the collision from being even worse. That includes putting on your seat belt, following the speed limits and preventing yourself from swerving on the road as much as possible.

“If you swerve, you risk the chance of going into oncoming traffic. Much more serious injuries and crashes occur when people actually try to miss a deer,” Harris said.

He says it’s best to prepare just in case of a crash.

Make sure that you have the right coverage on your insurance policy,” Harris said. “That’s going to protect you the instances of you hitting a deer or really any other animal for that matter.”

According to the study, there were over 30,000 claims just from deer-related collisions in the stats over the past year, which is down by at least 2,200 claims.