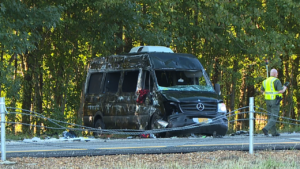 Around 4 a.m., the Tennessee Highway Patrol was alerted of a two-vehicle crash on eastbound Interstate 40 near mile marker 49.

“The van apparently was going east. Apparently over corrected and came to rest in what we call lane two, which is the slow lane on I-40,” Lt. William Futrell said.

There were 10 people in the van. They were standing on the shoulder when a tractor-trailer came along.

“At that time the tractor-trailer wasn’t able to move from hitting the vehicle, and the vehicle was knocked into the people that was on the shoulder,” Lt. Futrell said.

The two passengers in the tractor-trailer were unharmed, but all 10 people on the shoulder received injuries.

With the extent of their injuries still under investigation, the lieutenant says due to the high speed of vehicles on I-40, this accident could have been even worse.

“It could have been really bad if they were still inside of the vehicle at the time with the tractor-trailer hitting them,” Lt. Futrell said.