MCKENZIE, Tenn. — Leaders with the Campbell Arms Manufacturing Company say they have been battling with the McKenzie Industrial Development Board over being evicted from their location in the Industrial Park. 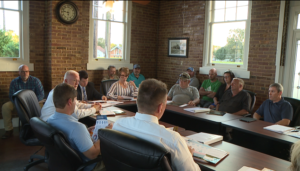 Campbell Arms came to McKenzie in 2017 in efforts to grow their business and create more jobs.

But this past August, company leaders say they received an eviction notice from the McKenzie Industrial Development Board. Dusty King is legal counsel for the industrial board.

“We filed a complaint, there was come delinquency in the rental payments, there was some other issues or obligations that Campbell Arms had under the terms of the lease agreement that were not complied with,” said King.

Ferguson said the eviction has stopped business for them.

“These guys just want to say, ‘get out’. No! As a citizen of this town, I’m highly mad,” said Williams.

Ferguson came to the Tuesday night’s meeting to talk with the board member about the eviction.

“I don’t believe anyone was on the agenda to speak from Campbell Arms so I believe that was the proper protocol. If they weren’t on the agenda,” said Attorney Dusty King for the McKenzie Industrial Board.

Board members say company leaders will be able to discuss the issue further in a scheduled hearing.

“Now there is a hearing for possession of the property. It is scheduled at the Carroll County Circuit Court on the 17th,” said King.

In the meantime Ferguson says he will talk more with his attorney to see what actions he can take before the hearing.

“We’ll address the situation and address their offer and see what they can do to try to move forward,” said Ferguson.

The hearing is scheduled for Oct. 17 in Carroll County Circuit Court.