Hurricane Michael forced many to evacuate, but some decided to ride it out. 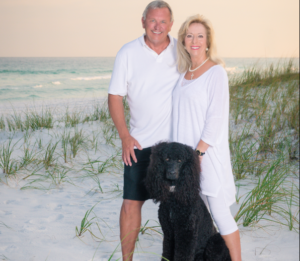 “I built this house 13 years ago, and I’d already been through 2 storms so I knew what to expect out of them,” said Jackson Native, Darryl Shelton.

Riding out hurricanes is nothing new for this Destin homeowner.

Darryl Shelton, who originally from Jackson, moved to Florida in 2000.

Shelton said he, his wife and dog stayed put as the hurricane approached, despite being advised to evacuate.

“The biggest reason why you stay in a case like this is to protect your property, for example, if a window got blown out, you need to be here to put some or something in that hole to keep from damaging your property more,” said Shelton.

Hurricane Michael made landfall about 80 miles to the east of Shelton as a Category 4, with winds up to 155 miles per hour.

“The winds here didn’t get over about 50 mph so we feel real fortunate to have dodged that bullet,” said Shelton.

“Looking at my neighbor’s house next door, they lost a few shingles, but uh other than that, that everybody here that were here boarded up pretty well,” said Shelton.

Wednesday night many Floridians were without power, but that wasn’t the case for Shelton.

“We feel good that we didn’t lose electricity, so the worst case if we lost electricity we would have been relegated to watch and download Netflix movies,” said Shelton.

Shelton said he knew the risks but says he thought it was best to trust his gut.

“The next thing you do is put everything back to where it was, I mean if it was outside or if it was brought inside, or it was tied down,” said Shelton.

Shelton said he’s thankful he didn’t experience as much damage to his property as compared to people in Panama Beach.