JACKSON, Tenn. — The Madison County jail expansion project is one step closer to being complete, but it comes with an expensive price tag. 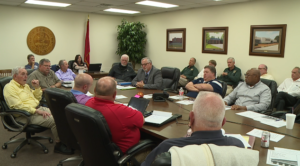 It’s been a long time coming for the jail expansion project.

“It’s been four years in this process, we think we come up with the right approach and what we need,” Madison County Mayor Jimmy Harris said.

Harris says commissioners will vote on the recommended $49 million price tag on the project, Monday.

The agenda review meeting Thursday was for commissioners to ask last minute questions.

“It was really for the commissioners to make a decision on how many beds we are going to build,” Harris said.

Chairman Gary Deaton says if approved, the nearly $50 million will pay to build 524 new beds and expand the jail by 150,000 square feet.

“524 means we could eventually close the penal farm and put everything under one roof,” Deaton said.

Deaton says it might be possible for commissioners to vote on a lower bond amount, but that amount wouldn’t cover the amount of beds needed.

“It’s never exciting to build a jail, but it’s something we know we have to do, and we want to do it in the right way,” he said.

Commissioners brought in Bob Bass, a state inspector with the Tennessee Corrections Institute to speak and answer questions.

“We’ve had an overcrowded jail for some time, we’ve been on a plan of action with the state of Tennessee,” he said.

Mayor Harris says overcrowding at the jail has been on ongoing issue and the expansion is a top priority.

“So many things we’d rather be spending money on rather than a jail, but it’s a reality and a requirement that we have to do,” he said.

County commissioners are scheduled to vote on the nearly $50 million project at their monthly meeting this Monday.

Commissioners say a contractor has been chosen for the project.

No date for construction has been set.