Jackson family displaced after house goes up in flames

JACKSON, Tenn. — A family is left without a home after their house goes up in flames early Thursday afternoon. 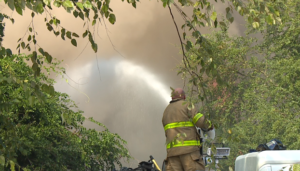 Fire officials say seven people were in the house when the fire started.

“They came in screaming, get out, get out, the house is on fire,” Shawn Fahey, who lives in the house said. “We just try to get everybody out.”

“My 4-month-old grandson was in there, my 79-year-old mother is in a wheelchair,” she said. “It was hard to get everybody out but we made it, we’re O.K.”

Fahey says she along with six of her family members were in the house when she says a power line fell on her carport.

Luckily, she says everyone made it out safely.

Shae Glenn was studying at the beauty school across the street when she saw the spark.

She says she and two other students rushed to the home, banging on the front door to alerting Fahey and her family to the blaze.

“We were scared because it started so little, and then it just went so big,” she said.

“Now we are in overhaul, trying to protect any evidence that might be there,” Pewitt said.

With most of her belongings gone, and no place to call home, Shawn Fahey says she is still counting her blessings.

“I’m just happy my family is okay,” she said.

The family said three of their dogs went missing after the house caught fire, but they have since been reunited with at least two of them.

The blaze shut down a section of Hollywood Drive as officials put out the fire.

The exact cause of the fire is still under investigation.