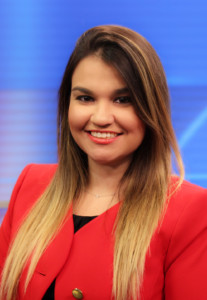 Stephanie Fernandez joined the WBBJ 7 Eyewitness News team in October 2018 as a multimedia journalist. She was born and raised in Miami, where it is always sunny and warm.

At the age of 16, Stephanie knew she wanted to pursue a career in television. She attended Miami Dade College after high school where she earned her associate’s degree in journalism. During her time at Dade, she was a writer at the student newspaper, The Reporter. There she won second place for in-depth reporting.

In 2015, she transferred to Florida International University where she majored in broadcast media. She wrote for Panther Press and reported for Bay News, a television station that runs out of FIU’s School of Journalism and Mass Communication.

During her time at FIU, she interned at WSVN, a Fox affiliate in Miami. After graduation, she also worked at WSVN as a chyron operator.

Stephanie is now excited to be in Jackson and work for WBBJ-TV, pursuing her dreams and being able to tell your stories.

In her spare time, Stephanie loves to read, try new restaurants, check out the latest movies, travel and write.

If you see Stephanie on the street, she says to come up and say hi.

If you have a story idea or just want to say hello, email Stephanie at sfernandez@wbbjtv.com.