Some West Tennesseans sound off on new roundabout

JACKSON, Tenn–Since it was announced the roundabout was going to be built leading into downtown Jackson, there’s been a lot of talk on whether it was a good idea. 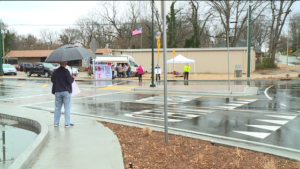 Local radio station 93.1 WTJS took to the streets Monday afternoon asking drivers and listeners to give their opionion.

“I didn’t know what they were honking for but I noticed the one honk,” said Antonio Beard who lives in Jackson.

Some drivers said they approve of the roundabout.

“I like it, I like walking down here it’s a peaceful thing I like how it looks, it adds a new look to the city,” said Beard.

Others have a different opinion.

“It shouldn’t have been right here, its plenty of spots in Jackson it could have been,” said Craig Rufus who lives in Jackson.

Joe Reeves who lives nearby said traffic before the roundabout was unsafe.

“When the light was here, there were people coming down the hill like they were on the speedway, trying to make the light if it were going yellow and people almost getting hit and other things like that,” said Joe Reeves who lives next to the Roundabout.

Reeves said traffic is much better since the roundabout.

“Traffic had been, it flowed really smoothly it seemed like,” Reeves said.

“If you ain’t never seen one of these they wouldn’t understand how to drive around here,” said Rufus.

“People always have a problem with it if you do something good or bad, so it’s a good thing, and in a long run they will see it,” Beard said.

Leaders with 93.1 WTJS say in the results of the Roundabout Approval Poll,  32 honked in approval of the roundabout and 29 honked in disapproval of it.