Video by Hardin Co. students gets 100,000 views on YouTube

HARDIN COUNTY, Tenn. — A video made by local high school students has reached 100,000 views on YouTube.

“[It was] a lot bigger deal than I thought it was going to be,” Tiger Media teacher Ron Shank said. “If I had known how big of a deal, I might not have done it.”

The video debuted after several months of work on the project. 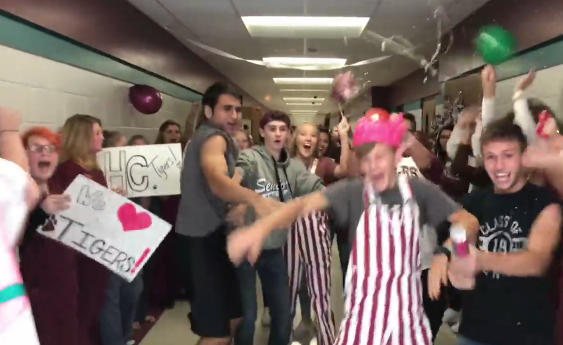 “We wanted to do something real big and something a lot of fun to launch the TV side of things that we’re doing,” Shank said.

He and his students say the group worked endlessly on the nearly 9-minute video.

“It was a really long process. Some nights we would be up at the school until 8 o’clock at night,” Delaney Harris, who helped produce the project, said.

“They also planned out what songs they wanted in each section. They had to plan out how long it takes to walk to that section, they had to walk through several times, they had to edit songs, trim songs,” Shank said.

“You had to know the song perfectly or you wouldn’t be in sync with the music,” Kailei Navarro, who performed in the project, said.

The cameraman was one of the students, and to get the shot smooth, he used a gimbal with a cell phone and walked backwards for upwards of 15 minutes at a time.

“When we started, I was kind of nervous that I would mess up, but when we got towards the end, I wasn’t thinking about that,” Matthew Roach, who worked the camera, said.

“At the end of the day, it fell on your shoulders the day of filming,” Harris said, referring to Roach.

The students are proud of their work.

“When it was over, I’ve never been more proud of our senior class,” Preston Thrasher, who was in the video, said. “Everyone was so excited, and there has never been a more special moment for me and my high school group.”