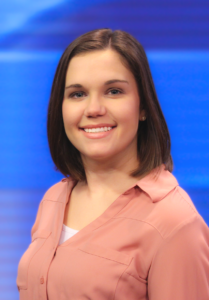 Ali Mason joined the WBBJ 7 Eyewitness News team in January 2019 as a multimedia journalist. She is originally from Port Lavaca, Texas, a small town in the coastal bend region, where she spent the first 14 years of her life.

Ali has lived in Lake Charles, Louisiana for the last seven years, attending high school and college. She attended McNeese State University for her degree in mass communication with a concentration in journalism. She also minored in psychology.

While at McNeese, she was on the speech and debate team for three years, serving as team president for two and winning several public speaking awards, including a national qualification in persuasive speaking. Ali was also a member of the National Society of Leadership and Success, and Alpha Delta Pi sorority. She also had a daytime and nighttime radio show at the campus radio station, KBYS 88.3 FM.

Ali is excited to be in West Tennessee and wants to tell your stories! Reach out on Facebook or Twitter, or email her at amason@wbbjtv.com.