DYER COUNTY, Tenn. – The Tennessee Bureau of Investigation is working alongside the Dyer County Sheriff’s Office and Tennessee Fire Investigative Services to investigate a car fire.

“At approximately 2:43 am this day a passerby reported to the Dyer County Sheriff’s Office there was a vehicle on fire,” said Sheriff Jeff Box. 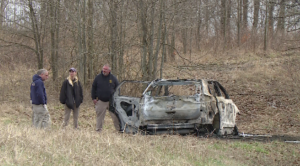 According to a press release sent by the TBI, two bodies were found inside the burned vehicle just off Great River Road.

Lenox Fire Department arrived on the scene to put out the fire.

“They found a 2019 Ford Edge off to our left here off the Great River Road here just north of I-155 near the Mississippi River.”

Authorities say the car was a rental out of Kentucky.

“At that time the fire department extinguished that vehicle and deputies on the scene learned that the vehicle contained human remains,” said Box.

Dyer County Arson Investigation, State Bomb and Arson Unit, wildlife resources, THP and district attorney Danny Goodman were on the scene and several other agencies assisting in the investigation.

“We have the Shelby Medical Examiners Office on scene to examine those remains,” said Box.

Police and the TBI need your help. Anyone with information regarding the incident is asked to call 1-800-TBI-FIND.