JACKSON, Tenn. — As the month of February continues, so does the celebration of Black history. 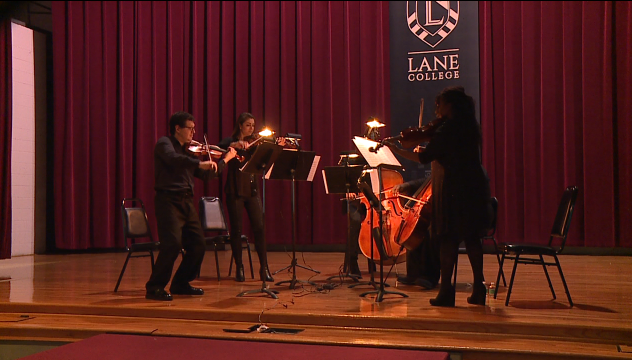 “I’ve seen ‘Black Panther’ 27 times so far — 27 times. That’s one of my favorite movies right now, and I also find something different every time I watch it,” Hurt said.

Hurt says the song selection lifted the crowd’s spirits. However, another song the group played, added to the list at the last minute, called “Strange Fruit” by Nina Simone, got an emotional reaction from the crowd.

“‘Strange Fruit’ was not originally on the program. However, I reached out to Laurice Lanire, one of my close friends and amazing soprano, and she told me I want to do a part in this, and I was like, ‘Cool, let’s do it,'” Hurt said.

“You’re talking about what just happened in the past, especially to African-American people, and how we would hang from the tree and the smells, and the scents,” Lanire said. “To just see that picture, and paint the picture in everyone’s head, but at the same time it’s traumatic, but still, you still know it happened and you can still move on.”

Hurt said he wants the audience to have an appreciation for classical music, regardless of what race performs it.

“Music is colorless. There’s no color with music. There’s color in what we play, but there is not black and white, there’s none of that,” Hurt said.

That appreciation was given by every attendee at their feet for a standing ovation.

“Joy Jesus joy, I mean this was just a joyous occasion to celebrate the history of a people through music, and through an unusual way for us, through classical music,” Lane College President Logan Hampton said.