McKENZIE, Tenn. — When most people think of an academic signing day, they generally think about sports, but not in this case. 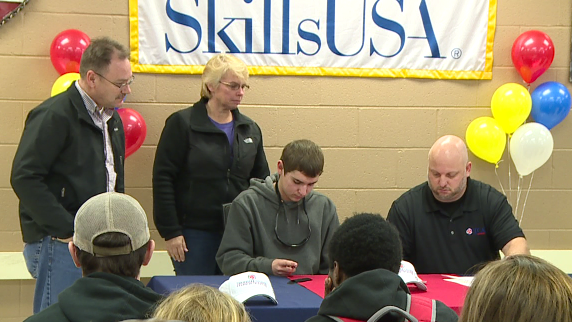 High school students from across West Tennessee announced their decisions Thursday to go to the Tennessee College of Applied Technology in McKenzie.

“It’s encouraging to see some of the younger generation signing on with our program,” TCAT welding instructor Jeremy Tucker said.

“When they sign the letter of intent, it shows that they want to be a part of the program,” TCAT welding instructor David Earley said.

Many of the students who signed Thursday are already in a dual enrollment program at McKenzie High School and other schools.

New students say they’re looking forward to the next step in their education.

“A really good computer class, that’s going to drive me towards what I want to do in life,” Smith said.

This is the third year TCAT campuses have held a signing day.