LEXINGTON, Tenn. – Grammy Award-winning songwriter and producer Buddy Cannon has written for some of the biggest names in country music, and he’s traveled the country thanks to his talents. 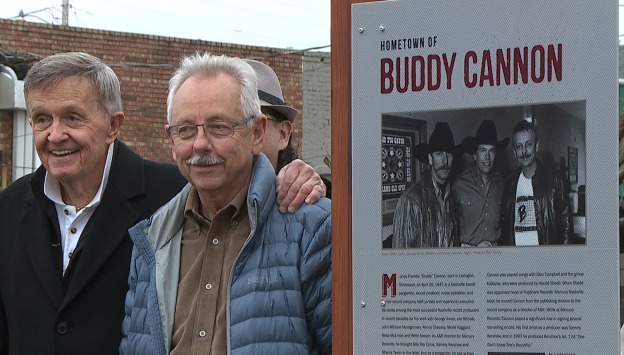 But Saturday night, it was all about returning to his hometown of Lexington, Tennessee.

Cannon will now have a special marker outside the Princess Theater in Lexington. Friends and family attended the unveiling, and everyone agrees Cannon is still as humble as ever.

“He’s still the same person he was when I married him, he’s not about the glitz and glamour, he’s just the simplicity,” said Billie Cannon, his wife of over 50 years.

Cannon and his wife both call Lexington home. Cannon attributed his talents to the influence of Carl Perkins and others from the area.

“I played music all my life. When I got old enough to start playing in bars and making a little bit of money, I saw no reason to do anything different,” Cannon said.

The marker outside the theater details his career accomplishments and beginnings. As part of the Tennessee Music Pathways program, more than 200 locations within the state will unveil statues, markers, murals, or other attractions.

“I always pinch myself everyday. I can’t believe I’m doing this,” Cannon said.

Arguably his biggest supporter showed up to the celebration: his 95-year old mother, Lyndel Rhodes. She recalls how she knew he would make it in the music industry.

“We would listen to the songs on the radio. He could hear one [song] two or three times and he had it. I mean from three years up. He’d go around singing all the time,” Rhoades said.

Woman calls police on home intruder, turns out to be robot vacuum