FRIENDSHIP, Tenn. — Gutsy the Flying Fox flew in from Georgia to make some rounds at eight area schools for a little end of the year motivation. 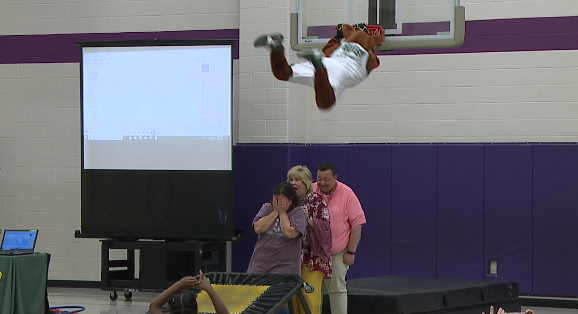 That’s all thanks to an area business owner.

“We wanted to do something to show them we appreciate them and we’re behind them, and what better than a flying fox?” said Steven Tate, owner of Tate’s Quick Stop and Tate Family Foods.

Gutsy speaks about positive behavior to teach students about good character and values.

“Gutsy talked about anti-bullying, having a positive character and helping each other out, being a friend, and taking care of each other, just a really positive message for our kids,” Tate said.

Students played interactive games to learn about those values.

Tate said it’s all about giving the students something for their futures.

“I just think that these kids are our future, and we’ve just got to make sure that we give them the tools and that we’re showing them the positive things, and we’re acting that way ourselves,” Tate said. “We’re trying to give them the best tools they can to have a positive future.”

Gutsy made stops at Friendship, Maury City and Spring Hill. He is scheduled to make stops at Dyer, Rutherford, Kenton and Greenfield in the coming days.