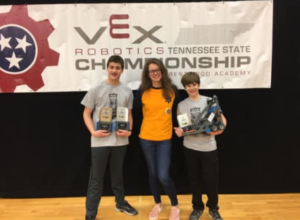 “I like designing and the rebuilding of robots,” said Little.

Yet, Little never considered a future in engineering.

“If you asked me before, I would say anything but engineering. I wanted to do what everyone said I didn’t,” said Little.

In fact, she wanted to be a youth minister.

“I don’t think it should be male versus female. I think teaching to STEM or teaching to arts, we should teach to what the kid enjoys and, like, what they’re good at instead of what we think they should be good at,”said Little.

She has written several funding grants totaling $1,800 which she used to start an elementary level robotic team at The Co, Jackson’s Entrepreneurial Center. She coached the Carbonell brothers to win a state tournament.

“She taught us the engineering process : think, test, do,” said Stephen Carbonell.

“It was very fun and enjoyable,”said Christian Carbonell.

“That’s her heart. If she has the ability to give and it’s just something that’s so natural to her,” said Little’s mother, Billy Jo.