LEXINGTON, Tenn. — Among the tombstones at Lexington Cemetery is one that now stands out from the rest as its name has been removed in an act of vandalism. 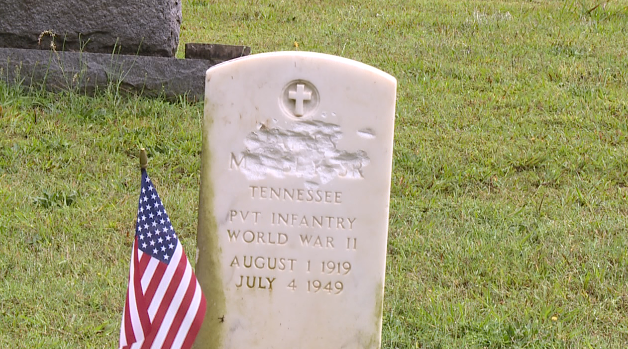 “It appears someone took a chipping hammer or hammer and a chisel, and chiseled off his name,” James Massey Jr. said about his father’s tombstone.

Two weeks ago, Massey’s cousin was putting flags up at the cemetery for Memorial Day. That’s when he saw the vandalism of Massey Sr.’s grave.

“To go and see something like that, it’s heartbreaking,” Massey Jr. said

Massey Jr. is a veteran, like his father. He served in the Navy for more than 26 years.

He says the community is already offering to help. “I don’t feel good about it. But, I do feel great about the people calling me, offering to put it down. I was going to pay for it myself.”

Massey Jr. says he can’t think of any reason why this would happen.

“I don’t know of any enemies he had. He’s been dead since ’49,” Massey Jr. said. “I don’t know of enemies I have, so I think it’s just a random thing. Somebody just went over there and did something.”

Lexington police say they do have a report on file and they’re investigating to find out who did this to the tombstone.

We heard about this thanks to the story in the Lexington Progress.