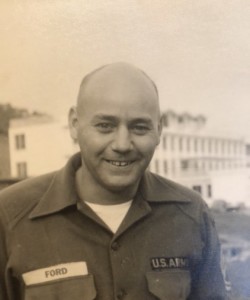 Calvin Richard Ford, aged 87, died peacefully on June 10, 2019 in his home surrounded by those he loved most. Mr. Ford was a resident of Alamo for over 40 years and Mr. and Mrs. Ford raised their family in Crockett County.

Mr. Ford was a retired First Sergeant of the United States Army after serving for 20 years in the Vietnam and Korean War where he received many commendations for his service including a Purple Heart and three V for Valor awards. However, Mr. Ford’s greatest accomplishment was his family. Calvin Ford was a dedicated father, grandfather, and great-grandfather who cared deeply about his immediate family and continuously went the extra mile for their wellbeing.

In lieu of a traditional memorial service and visitation, the family has decided to participate in a private graveside memorial consisting of only immediate family. The family would like to thank the local American Legion group for flying the American flag in the court square of Alamo, TN at half mast in Mr. Ford’s honor on June 11, 2019. The family appreciates all the love and care shown from this community through such a challenging time.

The family requests that any contributions made in Calvin Ford’s memory be made in the form of donations to St. Jude Children’s Hospital in Memphis, TN.