JACKSON, Tenn. – In just one week, Jacksonians will find out if Scott Conger or Dr. Jerry Woods will be the next mayor of the Hub City. The two Jackson mayoral candidates participated in the one hour forum Tuesday night inside the Union University’s Grants Events Center. 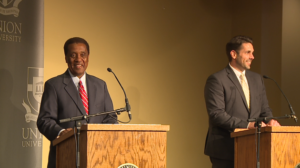 One of the topics they covered is the city’s budget.

“I think we need to tackle our financial issues,” said Conger. “Make sure our budget comes back in line and the three things we have talked about since August being efficient, transparent and inclusive in everything that we do and making sure that we are driving efficiency everyday.”

“We want to look at the capital budget in such a way that will include looking at our revenues and finding other areas revenues,” said Woods.

The candidates had 90 seconds to answer each question. Some questions were sent in by community members.
Conger and Woods expressed how they would tackle issues in Jackson as the next mayor.

“I want to make sure our children have the opportunity when they graduate high school and college to stay here and plant roots in Jackson those decisions that are made today impact that now for 20 years,” said Conger.

They each shared how they hope to improve the Hub City.

“Visualize a Jackson that will be there that we can hand off to our children. Our children can live in a more safer neighborhood, a more quality neighborhood and a more progressive city,” said Woods.

“We have to make that investment on economic development and workforce development,” said Conger. “We are going to have a new academic school, a new JCM. Those are opportunities that the city can have.”

Four-hundred and forty-one people early voted Tuesday, pushing the total to 7,026 votes that have now been cast in this election.
This number exceeds the votes cast in the entire early voting period of the regular May 7th City of Jackson election.

Early voting will go through Thursday, June 13th.
Voting hours are from 9:00 am until 4:00 pm through Thursday.
Make sure to bring your government issued ID’s.
June 18th is Election Day for the mayoral race.