JACKSON, Tenn. — It was a special day at Liberty Park in north Jackson as not one, but six flags were raised on Flag Day. 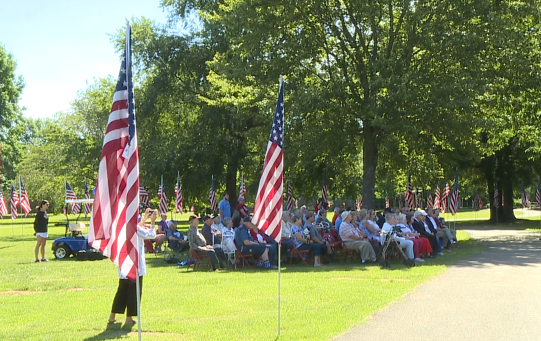 “We have six new poles that we just put up,” master of ceremonies Tom Turner said. “We did a lot of fundraising and a lot of work to get them up, so we’re going to have all the armed forces flags posted up along with the American flag so it’ll have a permanent place here in the park.”

Veterans from the Army, Navy, Air Force and Coast Guard were recognized during the ceremonies.

“I think it would say it’s the meaning of it, and the faces of some of our older veterans,” Associates of Vietnam Veterans member Bonnie Butler said.

The flags, spread all over Liberty Garden Park, are in honor or memory of servicemen.

“It means a lot to me, and it should to everybody, because people lived and fought and died for our freedom under this flag,” Butler said.

They have a message to people on this Flag Day.

“You know, it’s not just a piece of cloth you can stomp on and dishonor. It’s something special. It represents all your ancestors and everyone who has given their life for this country,” Turner said.