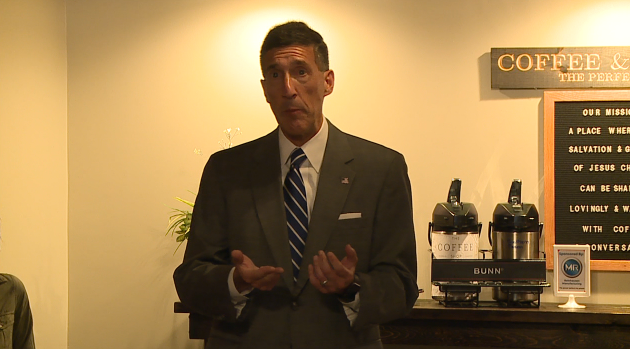 West Tennessee residents filled The Coffee Shop in Humboldt to listen to Kustoff update them on the latest news in Washington.

Kustoff’s main focus was the economy.

“Things are good across the nation economically,” Kustoff said. “They’ve been good in West Tennessee for the last two to three years. I think President Trump deserves a lot of the credit.”

He then discussed a variety of topics and bills that he voted on. Kustoff mentioned the recent $15 minimum wage bill, which passed the House of Representatives, and why he voted no.

“It could hurt the economy and could result in job losses,” Kustoff said.

Kustoff also voted no on a recent defense budget, which he said made too many cuts.

“I think it impaired the readiness of our service members, and that concerned me,” Kustoff said.

Two audience members asked him about healthcare. Kustoff pointed to a recent House vote on a tax on employer-sponsored health insurance plans.

“I’m proud that I was a co-sponsor of a bill that we voted on this week, that would repeal the harmful Cadillac tax,” Kustoff said.

When asked about recent controversies, Kustoff pointed to Nancy Pelosi and House Democrats as the reason for legislative gridlock.

“It takes time away from the important issues we could be voting on that Speaker Pelosi isn’t letting us vote on, and that’s unfortunate,” Kustoff said.

The congressman mentioned that he will be taking a trip to the US-Mexico border soon to assess the situation there.