2 new football stadiums might make the cut this season

JACKSON, Tenn. — North Side and South Side high schools are hoping their new stadiums make the cut for this season. 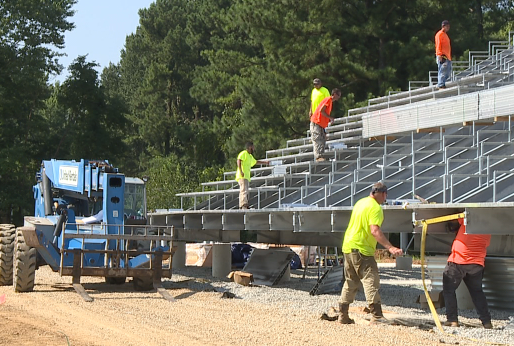 South Side’s new football stadium is in its final stages, with their first home game against University School of Jackson scheduled for August 30.

“They’re finishing up the bleachers this week. They’re supposed to set the press box on Thursday. They’re getting the track ready to pave, so we’re getting there,” Reeder said.

And the boys are ready to step foot on their new home turf.

“We’ve come off two good years. We’re still building on that,” Reeder said. “A lot of new faces. [We] had a big graduating class, so this is a chance for this senior class to put their trademark on it.”

North Side is scheduled to play their first game of the season at the new stadium, and so far it’s looking like that’s going to happen.

“I was thinking there’s no way in the world they’ll get done by then,” North Side Head Coach Jesse Powell said. “But they’ve been working day and night, and it’s almost done. So we’re hopeful.”

“It looks like a totally different place. From the curb view, it’s beautiful. There’s a big Indian head on the building that lights up at night, so you can see whose house it is when you come. Brand new scoreboard that looks beautiful, new goal posts, new ticket booth. It’s one of the best facilities in the area, and we’re very proud to have it,” Powell said.

Both teams are scheduled to play in jamborees this Friday.