MARTIN, Tenn.– It’s the 26th year for the Soybean Festival in Martin and there’s all kinds of things to get into. 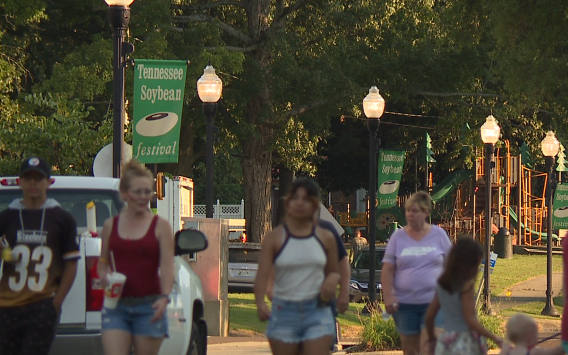 If your a first timer at the Soybean Festival, you probably don’t know where to go. The Soybean General Store is the perfect place to start.

Inside you will find a pamphlet and in the middle of the pamphlet you’ll find a full schedule of events, and a map in there that will show you where to go.

Also if you lose something and you don’t know where to find it, this is also the perfect place to go.

Sunday afternoon festivities kicked off with the Sea Lion Splash.

“This is also one of the only companies in the United States that has the South American sea lions,” said Jessica Carmon, sea lion trainer.

Then you can head over to Eudora Farms to see animals from around the world.

Owner Mark Nisbet said people can see one of the animals from a block away.

Then you can walk over to the Brian Brown Greenway Art Display open, where one of the art murals with the most votes could win the art competition.

“Yeah we like it all. I think it’s fun,” said festival goer Cathey Gearin.

Gearin said she has been coming to the Soybean Festivals for over a decade.

“We used to come down here back before they had all the chairs and stuff you’d bring your lawn chairs, and we’d just get crazy out here in the middle,” Gearin said.

For a full look at the week-long festivities go to the Soybean Festival website.