Hot and Humid Forecast for Friday

Though afternoon temperatures were in the middle and upper 80s today, we can look forward to a cool night with low temperatures that we typically get around the middle of September. In fact, there are a few cool mornings on the 7-Day forecast but we will have to endure some extreme heat and humidity on Friday first!

TONIGHT
A mostly clear night is forecast for West Tennessee with patchy fog in the morning and low temperatures in the upper 50s and lower 60s by sunrise. Temperatures will be warming up quickly tomorrow, so enjoy the cooler weather while you can! 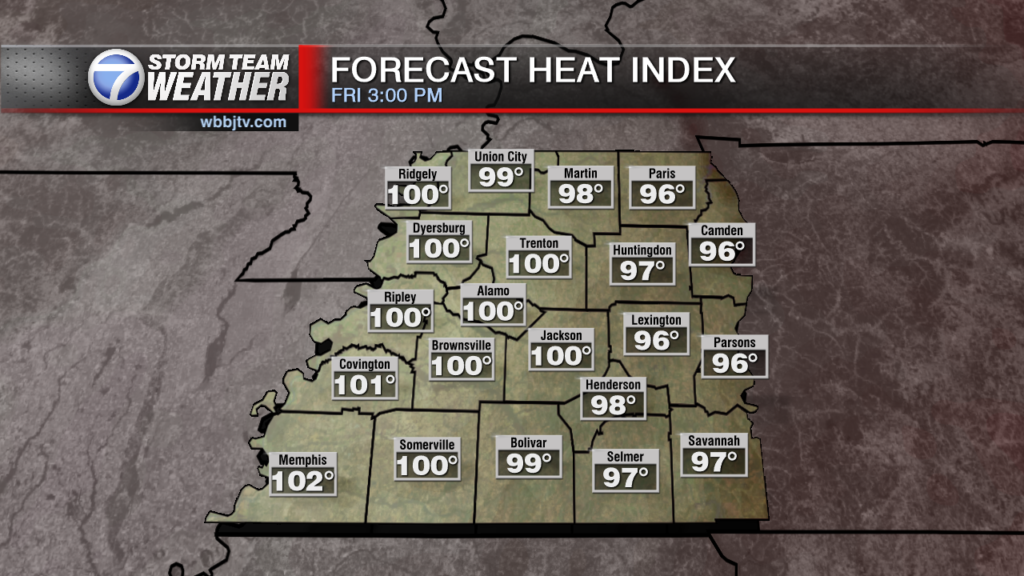 The heat will be back in full force on Friday! Temperatures will be in the lower 90s in the afternoon under sunny skies with humidity causing it to feel like 100°F at the warmest point of the day. At kick-off, high school football game temperatures will feel like the lower 90s so stay cool! A cold front will come through West Tennessee Friday night bringing a 30% chance for rain to northwest Tennessee followed by cooler temperatures on Saturday and Sunday. Stay with WBBJ 7 Eyewitness News for the latest forecast including an update on Hurricane Dorian and keep up with Storm Team Weather online too for more updates.

At 10:00 p.m. CDT, the eye of Hurricane Dorian was located near latitude 33.8 North, longitude 77.4 West. Dorian is moving toward the northeast near 13 mph, and this general motion is expected to continue with an increase in forward speed through Saturday. On the forecast track, the center of Dorian will move near or over the coast of North Carolina tonight and Friday. The center should move to the southeast of extreme southeastern New England Friday night and Saturday morning, and approach Nova Scotia later Saturday or Saturday night.

Maximum sustained winds are near 100 mph with higher gusts. Slow weakening is expected during the next few days. However, Dorian is expected to remain a powerful hurricane as the center moves near the coasts of South and North Carolina. Dorian is forecast to become a hurricane-force post-tropical cyclone by Saturday night as it approaches Nova Scotia.

The minimum central pressure is estimated to be 958 mb based on a recent report of 958.9 mb from Frying Pan Shoals buoy located in Dorian’s eye.

Tropical storm conditions are expected in the Tropical Storm Warning area in the Mid-Atlantic states by Friday and over portions of extreme southeastern Massachusetts by late Friday or early Saturday.

Water levels could begin to rise well in advance of the arrival of strong winds. The surge will be accompanied by large and destructive waves. Surge-related flooding depends on the how close the center of Dorian comes to the coast, and can vary greatly over short distances. For information specific to your area, please see products issued by your local National Weather Service forecast office.

RAINFALL: Dorian is expected to produce the following rainfall totals through Friday Night:

SURF: Large swells will affect the northwestern Bahamas, and the entire southeastern United States coast from Florida through North Carolina during the next few days. These swells are likely to cause life-threatening surf and rip current conditions. Please consult products from your local weather office.