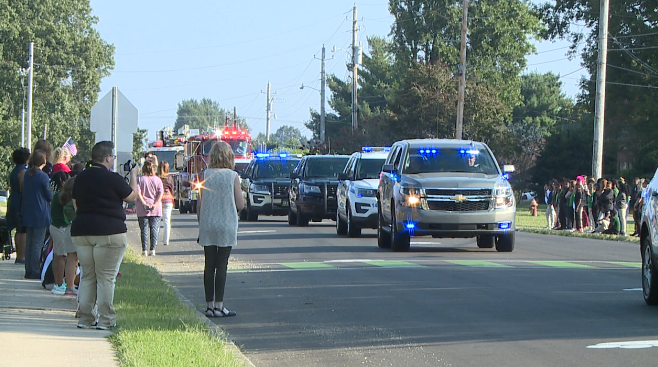 “I got to work and the TV was on, and we saw a plane hit a building,” Bolivar Fire Chief Lynn Price said. “First we really truly didn’t know what was going on. But then after the next plane hit, we realized we were being attacked.”

“I had a bad feeling in my stomach,” Tennessee Highway Patrol Lt. William Futrell said. “You know, you go through the anxiety. ‘Is that the only place that’s going to be hit?’ or ‘What’s going on?'”

The city of Bolivar hosted a 9/11 memorial and procession ceremony Wednesday, the 18th anniversary of the September 11, 2001, terrorist attacks.

The day started early, with Joe’s Restaurant inviting first responders for a special breakfast buffet with each other.

“I got the flyer from the city here and I said ‘I’ve got to be there. I’ve got to show my support,'” Lt. Futrell said.

From the restaurant, a group of first responder vehicles held a procession to the fire department. They were greeted along the way by elementary students, most born over a decade after the attacks occurred.

“This is our way of showing our fallen brothers that we won’t forget this, just to see the support that we have here in Bolivar,” Chief Price said.

The memorial service included candle lighting to commemorate all lives lost in the attacks, as well as special recognition of those first responders.

“We come together for this. The camaraderie, the fellowship, the brotherhood,” Lt. Futrell said.

The speaker at the ceremony was Capt. Derick Tisdale with the Jackson Police Department.