What’s New Wednesday: Life Is What You Bake It 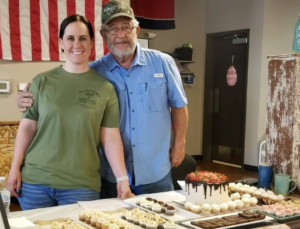 ughter duo started their own business called  “Life Is What You Bake It” in Martin.

“The secret is: the bigger, the better!” McClain laughs.  “My dad is the potter,” she adds.

“We’re both entrepreneurs. She had the baking ability. I had the pottery. She’s old enough now, she doesn’t just do what Dad says,” laughs Pastor Jim Keeling.  “She wants to do her own thing but, yeah, we get along real well.”

Everything is made by hand from the baked goods to the pottery consisting of mugs, bowls, plates and more. Pastor Keeling who goes by “Preaching Potter” embeds leaves from his own yard on the mugs.

“I also put a scripture verse on the bottom,” says Pastor Keeling.

And customers are loving it!

“I come here everyday. I had everyone I know try a cinnamon roll,” says Chelsea White, a loyal customer.

They agree, life is what you bake it.

“It’s the most unique shop in town,” said Pastor Keeling.

Life Is What You Bake It is located at 108 North Lindell Street in Martin, Tennessee.