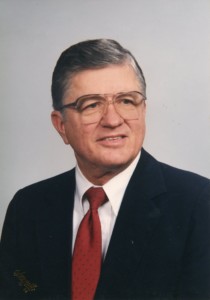 Danny D. Brazelton, Sr., age 89, died on September 17, 2019, at his home in Paris, TN. He is survived by his brother, Bill Brazelton, of Knoxville, TN; his sister, Janice Teas, of Paris. He is preceded in death by his wife, Janet E. Brazelton of Paris.

Dan was born on November 28, 1929 in Lewisburg, TN, to parents Arthur P. Brazelton and Nell Brazelton. He graduated from Mississippi State University with a degree in Civil Engineering, after serving in the Air Force as a staff sergeant. His career involved several engineering positions and he was co-founder of Paris Industrial Services, Inc.

Dan was a Christian man who was deeply involved in the First United Presbyterian Church of Paris for the majority of his life. He served as a Deacon and Elder, and also sang in the choir. He worked with the Marion Medical Mission and made a trip to Africa with Janet where they excavated several of fresh water wells for the villages.

Dan was involved in his community and served as a commissioner for the Paris Housing Authority from 1973 to 1997. His accomplishments include: Eagle Scout and commercial rated airplane pilot.

The funeral is scheduled for 1:00 pm on Thursday September 19, 2019, at the First United Presbyterian Church of Paris. Visitation will begin after 11:00 am at the church.

In lieu of flowers, donations can be sent to Saint Jude or Marion Medical Mission.