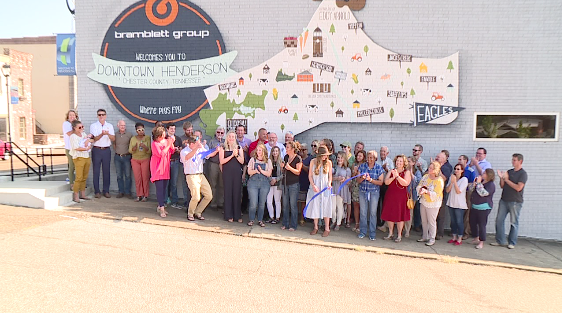 For the past two months, Lora Lea Landrum has been working on this mural.

“There’s a strong sense of community and love and coming together here anyway and that’s just celebrates that,” Landrum said.

She saw Landrum working on the mural and stopped to tell her story.

“They remind me of when my father did the first barbecue here in Chester County at the barbecue festival, and then he and my mom were asked to come to the Smithsonian in Washington, D.C., they went there in 86 when Reagan was president,” Mallard said. “My mom cooked her pies and my dad barbecued hog.”

And this kind of reaction is something Landrum said she never expected.

And this mural showcases everything Chester County has to offer: farming, a university and state parks.

Thursday they celebrated the mural being complete with a ribbon cutting.

Both Landrum and Mallard say they hope this mural will do more for the community than just decorate a wall.

“Honor the history and the spirit of the community bring people together and give them a chance to meet each other and tell their stories,” Landrum said.

“I hope this right here helps people really realize what we have here in Chester County,” Mallard said. “We have a lot of great people here, and they will continue to come into Chester County, and this place will be more loving and caring with each other.”

And town officials encourage everyone to take pictures in front of the mural, and when you post them to social media, use the hashtag Where Pigs Fly.