Well-Above-Average Temperatures into the Weekend

Today was the 16th day with a high temperature of 90°F or warmer during the month of September. That stat alone isn’t overly dramatic since we’ve had Septembers with 20 days in the 90s, but when you compare it to other months this year, it starts to bring this heat to a whole new level. We only had 17 days in the 90s in July and with more heat ahead tomorrow, this weekend, and next week, we’ll likely have more days in the 90s this year in September than we did July – which has NEVER happened in Jackson’s weather history.

TONIGHT
After another hot afternoon in West Tennessee we were only able to get a few isolated showers to pop up producing localized downpours today. We’ll continue to have a mostly dry night across the area. Once again, most of West Tennessee will end up having had a rain-free day – the 23rd in a row in Jackson! We’ll have mostly clear skies tonight with overnight lows in the middle 60s. 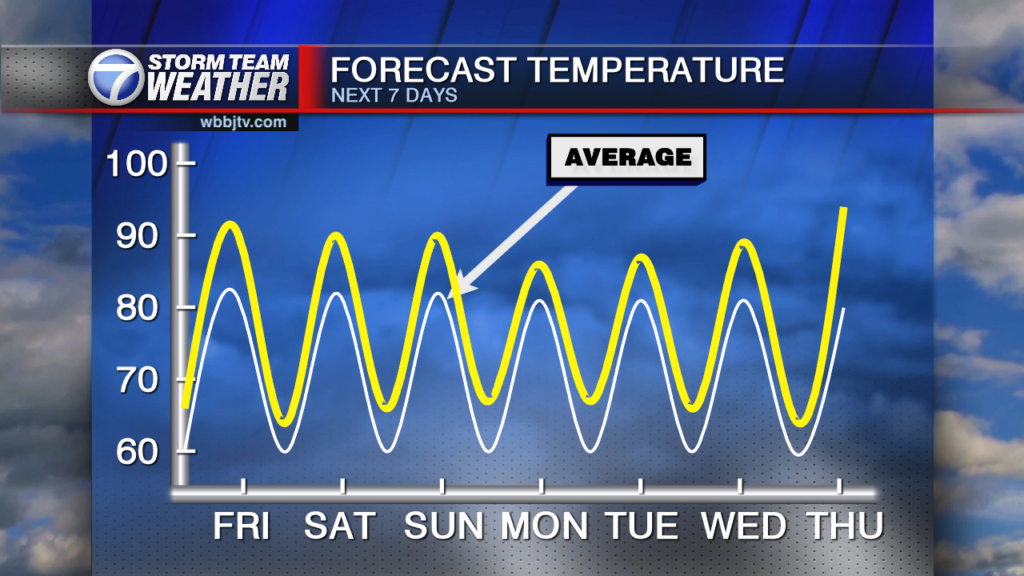 Hot and dry again tomorrow with high temperatures in the lower to middle 90s during the afternoon. However, because the humidity will be relatively low, temperatures should only be in the lower 80s at 7 o’clock with lower 70s showing up toward the end of tomorrow night’s high school football games. Stay with WBBJ 7 Eyewitness News for the latest forecast including when we’ll finally get some more rain with a cold front coming in early next week, and keep up with Storm Team Weather online too for more updates.