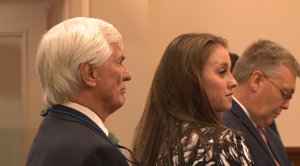 “There was a video or tape that is available that was not actually able to be played by the parties involved in it, the parties here, and they’re trying get the machinery or mechanism to be able to view that,” said Judge Steve Beal.

Jessica Nicole Conger, wife of Jackson Mayor Scott Conger, returned to court Thursday for a hearing on a misdemeanor shoplifting charge. Conger was cited after court documents say she failed to ring up 28 items, a total of about 84 dollars, at a self-check out in the North Jackson Walmart on July 21st.

“It’ll be two to four weeks. I think there is a conflict with the DA’s office with a judicial conference on the 23rd,” said Beal.

“The matter is going to be continued today until other matters can be taken up and view that video.

The hearing was reset due to problems playing that video. Conger is scheduled to appear in court again at 1:30 p.m. November 7.