JACKSON, Tenn. — The biggest food bank in West Tennessee is trying to make sure they have enough food to make it through winter. That’s because this summer, the Regional Inter-Faith Association almost ran out of food. 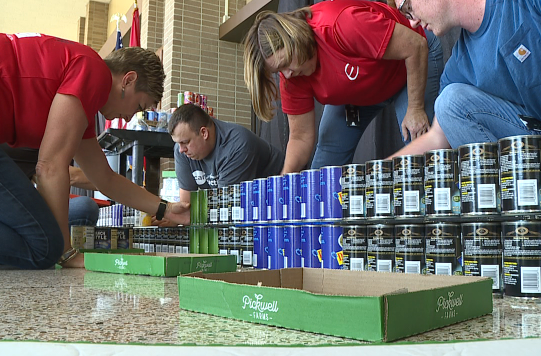 “There was a point where we had no green beans or corn. That’s really unheard of. Usually we have those two staple items,” said Lindsay Dawkins, marketing and events coordinator at RIFA.

Earlier this month, the University School of Jackson and Trinity Christian Academy food drive donated about 80,000 pounds of food. Now, they are expecting to get 40,000 pounds more this week.

“Now we will be able to give out, and give out generously,” Dawkins said.

Delta Faucet, Gerdau and other companies are some of the 14 organizations participating. They’re not just dropping off the food here. They’re going to be displaying it in a competition called Canstruction.

“As a human being, I think we’ve got to help the less fortunate ones who are struggling with a food problem,” said Kosh Sigdel, management associate at Gerdau. “We have to take it as our problem and solve it as a whole.”

In the 15 years Gerdau has been part of Canstruction, the company estimates they have donated about 75,000 pounds of food.

“Strategic planning, a lot of discussions, a lot of help, a lot of activities going around,” Sigdel said.

Judging for Canstruction is Wednesday at the Carl Perkins Civic Center. Winners will be announced Thursday night.

You can find more information about the event at RIFA’s website.