LEXINGTON, Tenn. — According to Henderson County Sheriff Brian Duke, domestic violence is a problem that local law enforcement is very familiar with. 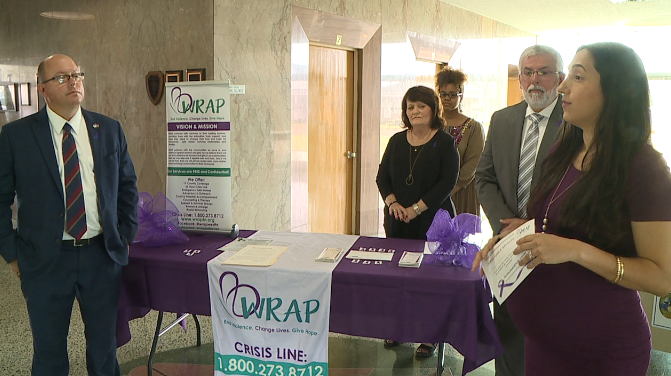 “Domestic violence calls are probably in the top five calls that we answer for service every year,” Duke said.

In Henderson County alone, the Wo/Men’s Resource and Rape Assistance Program helped around 150 victims of domestic violence last year. According to WRAP representative Tanya Lawson, they provide victims with a variety of resources meant to help protect them.

“Safety planning is a big one definitely. The clerk’s office for orders of protection, district attorney’s office, housing is also a big one,” Lawson said.

“We want to go ahead and come together with the community to proclaim that we won’t stand for domestic violence,” Lawson said.

“Having the privilege of dealing with WRAP now for several years, I just can’t brag enough. They’re such a great resource for families and for victims,” Duke said.

Attendees sported purple clothes and signed pledge cards to help spread awareness of the resources available to victims, which Lawson says can help connect WRAP to those who need them most.

“As long as they can go ahead and relay that information to a friend who is a victim of domestic violence, that can be very helpful, because they can call us themselves,” Lawson said.

“WRAP is there to support that victim through everything. That’s where they become so effective,” Duke said.

Other WRAP events in October include a round table discussion with law enforcement and shows of support in courthouses.