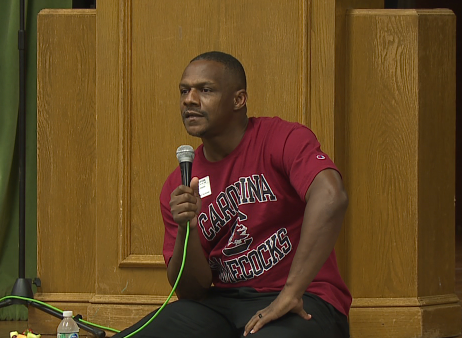 “I want them to know that they can achieve whatever they want to achieve in life, no matter what they’re going through, if they reach out for help,” Horn said.

He encouraged students and teachers to work together to solve their problems.

“Meeting the kids where they are and having our hands on their back, pushing them to their highest,” said Principal Mary Ann Polk.

And the students were interested in hearing his stories.

“One person asked me what was the important thing that made me want to keep on going. What pushed me when people downed me?” Horn said. “Everyone that downed me and talked negative about me, I used that as my pushing tool to keep going forward.”

Horn recognizes that this is a subject that doesn’t just belong in the high school auditorium. It needs to be continued at home with parents.

And he hopes this conversation is the beginning of a change.

“What did Mr. Horn say to make you change what you’re doing wrong? To make this house better?” he suggested parents ask their students.

He is also participating in the coin toss at the McNairy-Bolivar football game Friday night.

First Night in the Teens in Over 9 Months!