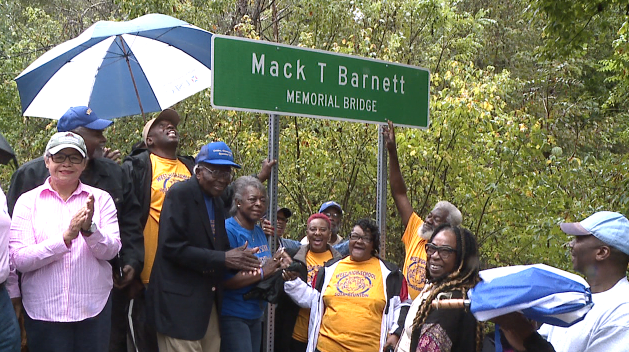 “It’s a great honor for him. I wish he was here to see it, but we are here to see it in our lifetime,” said Sophira Bradford, a 1962 graduate of West Senior High School.

Barnett was a Madison County native who attended Lane College and served in the U.S. Army before coming back to West Tennessee.

The former students at the bridge Monday morning were graduates of West Senior High School, where Barnett was the principal from 1962 to 1969.

He also had a former colleague and friend at the ceremony.

“Our friendship goes back a long way. He was a friend, he was a teacher, and finally he got to be my principal. He was my boss,” said Roscoe Burton, a former teacher at West Senior High School.

Barnett’s career in Madison County spanned more than 40 years, and it included multiple positions in schools, a vice presidency of the local NAACP branch, and even a Sunday School teacher position.

“I have a lot of respect for him and his family, and those that are responsible for this event,” Burton said.