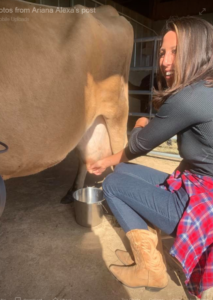 The Luckey Barn is a home to many animals. Faye Luckey opened the Luckey Barn just three months ago in Humboldt. Luckey’s husband farms 7,000 acres of cotton and she wanted to start something new. It’s a barn venue where families and children can get up close and personal to feed the animals.

“We have all these super nice animals that are super cuddly. We have baby doll sheep, a new pig named “Ellie May.” You get to feed the animals when they come and they are super attracted to you! They love it,” said Maddie Bowman, worker at The Luckey Barn.

It’s also a place to learn a thing or two.

It turned out to be a luckey day at the Luckey Barn for WBBJ 7 Eyewitness News Anchor Ariana Alexa.  She hails from San Diego, California, and learned how to milk a cow for the first time and even took a ride a unicorn.

“Second Saturday is a combination. It’s like a small community carnival,” said Luckey.

The Luckey Barn is located at 144 Jim Bob Scruggs Road in Humboldt.
They also have live entertainment, inflatables, horseback riding lessons and craft and flea market vendors at their “Second Saturday” events.