Law enforcement reminds drivers on importance of Move Over law

MADISON COUNTY, Tenn. — After a recent crash involving a deputy in Henderson County, first responders are reminding drivers of the Move Over law. 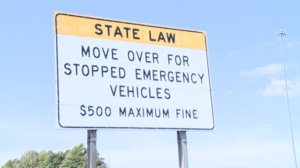 “If you’ve never been a police officer and stood on the side of the road or on the shoulder of the road talking to someone with your back to traffic, you wouldn’t understand it,” said Sheriff Paul Thomas with the Gibson County Sheriff’s Department. “But you know it gets pretty scary these cars don’t scoot over; they get close to you.”

The Move Over law in Tennessee requires drivers to move over and change lanes to give safe clearance to emergency vehicles.

A Henderson County sheriff’s deputy was involved in a crash Tuesday on Highway 22 near Parkers Crossroads, while the deputy was writing a citation.

Authorities say this incident could have been prevented. It’s actually a state law, and it includes more than just police and fire department vehicles.

“Wreckers, as well. They are included. They help us clear the road and without getting the cars out of the road that holds up traffic,” Thomas said. “Just give them the room they need to do what they need to do. People just need to use common sense. If you see even a car broken down on the side of the road, somebody changing a flat tire or something, just scoot over.

And if you can’t move over, just slow down.

The penalty for violating the Move Over law in Tennessee is a maximum $500 fine and possibly up to 30 days in jail.

Tennessee is one of 30 states with a similar Move Over law. In addition to police, fire, EMS, and wreckers, the law also includes utility crews and Tennessee Department of Transportation employees.