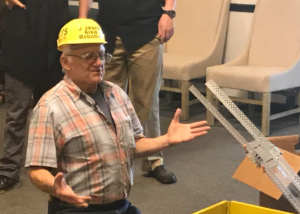 Rhodes Barnette is also known as “Mr. Rhodes” or as his business card reads “Engineer and Geek.”

He’s worked as a mechanical engineer for 40 years.

“I’m a semi-retired engineer. I build robotics for a living. When I saw kids doing it, it looked like fun, so I thought well, let’s do some more” said Mr. Rhodes.

For the past 11 years, he’s been involved with the Jackson Area Robotics club. He meets with area students at The Co once a week.

Students say Mr. Rhodes teaches failure is a part of the process.

“It makes you fail. There is really no way to be in this club and not fail. It lets you learn from that failure which
I think is all around far more effective,” said 15-year-old student, Charles Wade.

And when you do fail, Mr. Rhodes says just pick the pieces back up.

“He really wants to help people and he likes to see people succeed. He does that, not because he wants commotion, he does it because he enjoys people succeed at things. He’s made a positive impact in the community by opening this club and interfacing with all these students,” says Wade.

“I just like working with the kids and robots and it’s worked out well for me,” said Mr. Rhodes.