HENDERSON, Tenn.  — A local woman was charged with animal cruelty after a Henderson couple made a call for an animal welfare check on October 7. 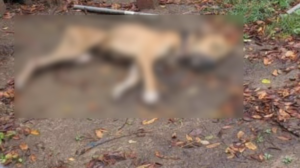 Nelia and Anthony King made a call on October 7 for an animal welfare check on Newsome Avenue in Henderson.

“We called authorities, and we let them be aware that something was very foul in the air,” Nelia said.

During this check, several dogs were found either malnourished or dead on their neighbor’s property.

The couple now has five puppies from that property, some they say the owner of the home allowed them to keep after they tried to return them when they wandered onto their property. The Kings say the pets had fleas and ticks.

According to a statement from the Henderson Police Department, Kristen Northam was charged with five counts of animal cruelty. Northam gave her side of the story, saying a lot of the information in the case was false.

Northam says animal control took her dogs away since they were treated for parvo. She claims only one dog died.

“They said there was a dog that was dead in the shed,” Northam said. “It was a possum, that had either crawled in, or Pork, who’s a big dog, possibly killed. It happens.”

“Me, personally, I don’t believe that they should still be allowed to have two other dogs after finding two dead dogs; it’s just not right,” said Anthony.

Northam has a General Sessions court date set for Tuesday, October 29 at 9 a.m.

City of Henderson Chief of Police Gary Davidson stated the following in a release:

“We take these calls very seriously. We are committed to pursuing any and all animal cruelty complaints we receive, as the law will allow.”

They encourage anyone with information on animal cruelty or any other crime to contact their office at 731-989-2201.