If you are ready to get spook 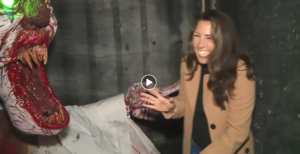 Brittain says it is different from anything else in Tennessee.

“The biggest thing that separates us is we touch you with a lot of things. Most haunts won’t touch you. We won’t touch with human hands, but we will touch you with most everything else. If you can’t stand someone in your face or blade to your throat or chainsaw touching your leg, then this is probably not the place for you,” said Brittain.

Camp Blood consists of seven cabins in between the woods with 50 actors, plus clowns, dolls, creepy swamps, zombies and more.

“We have a large percentage of people that don’t make it through without taking a chicken exit. I either want you to leave laughing or crying because either way you were entertained,” said Brittain.

Brittain used to volunteer for haunted houses before he decided to open one of his own. He says the Halloween equipment used is worth thousands of dollars, some pieces are the same used in Hollywood.

It opens again next year for 20 nights starting at the end of September 2020.